During the 1966/67 season, Celtic were a team that won every competition that they entered. This included the Scottish Cup, The Glasgow Cup, the Scottish League Cup and the most important one of all, the European Cup.

The 1967 Celtic team won the league at their arch rivals, Rangers, in front of 76,000 fans. They drew 2-2 will goals coming from Jimmy “Jinky” Johnstone. He scored goals in each half, securing the draw they needed to win the title.

Celtic’s European Cup victory was by far the biggest achievement during this great season for the club. The victory in Europe is seen as the greatest feat by any British side and it set the way for other British teams to compete and win on the European stage. There weren’t big money buys, they weren’t any marquee signings. Every player was born and bred in Scotland. The top scorer that season was Stevie Chalmers with 23 goals. Tommy Gemmell played in every match during the season while Billy McNeill only missed one game. 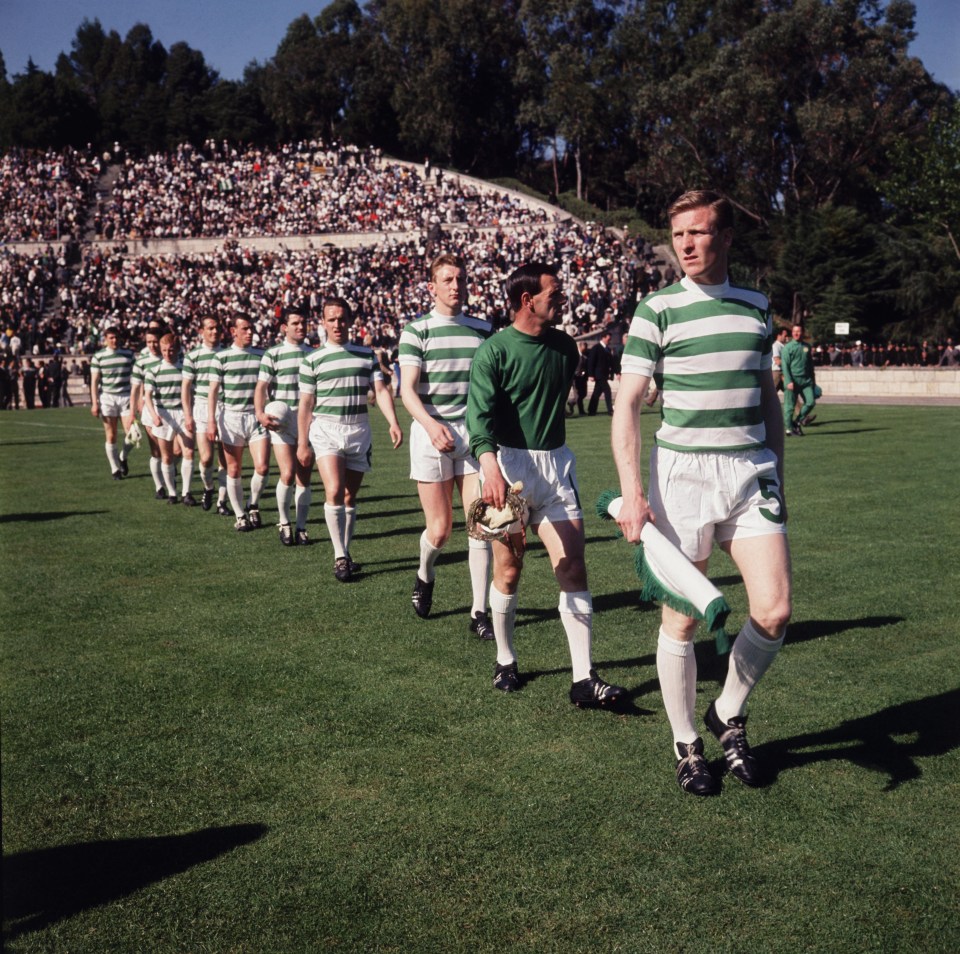 Other players played their part in the magical season too.  John Hughes made 5 appearances in the Euro Cup and won a winner’s medal despite missing the final through injury. Joe McBride also missed the final but made two appearances scoring 2 goals in the competition.

On the road to Lisbon, Celtic beat a host of great teams. In the first round of competition, they beat FC Zurich 5-0 on aggregate, winning 2-0 in Glasgow in the first leg. Nantes were the were the team they met in the second phase, winning 3-1 in each game to move to the ¼ final. Vojvodina Nova Sad of Yugoslavia were beaten 2-1 on aggregate while Dukla Prague were beaten 3-1 on aggregate in the semi-final.

The final was played in Lisbon on the 25th of May 1967 in the Estadio Nacional stadium. Celtic played Italian giants Inter Milan and came from behind to beat the ultra-defensive Italians 2-1 to lift the European Cup.  After going down to a dubious penalty, the late great Tommy Gemmell scored a great goal from outside the box then Stevie Chalmers scored to make the team go down as the greatest ever Celtic side.  The was a glorious night that hasn’t ever been matched by any other side. That night in Lisbon topped an amazing campaign for a side made up of of local Scottish lads.

At Perfect Memorabilia, we have the Lisbon Lions Limited Edition signed print. The print is signed by every Lisbon Lion that played in that historic match.

Please get in contact for any enquiries and stay up to date on the PM blog for more exciting stories from the world of sport.

0 0 Perfect Memorabilia Perfect Memorabilia2017-06-12 09:45:392017-06-12 09:45:39Lisbon Lions Story
Barcelona Legends Barcelona And Real Madrid Rivalry
X Close
We use cookies to ensure that we give you the best experience on our website. If you continue to use this site you are agreeing to our terms & conditions.I agreePrivacy policy
Scroll to top