People around the globe love a football rivalry that’s a bit heated. In this part of the world, we know that the biggest and most heated derby is of course, Celtic vs Rangers. But if we move closer the continent, a match which also catches the imagination around the world is Barcelona vs Real Madrid, the El Clasico. These clubs are known to fight it out each year to become Spain’s top club while also competing in Europe in the Champions League – which was won this year by Real Madrid and the help of the great Cristiano Ronaldo.

There’s so much that goes on in the game and outside of it. The fans eagerly anticipate the dates when both teams meet twice a season and the scuffles that may happen between the players.  During the summer transfer window, the Spanish giants try to outdo each other by signing the best players for the season ahead.  Adding to the mix is the rivalry between Ronaldo and Messi which is just an extension of the debate of Madrid and Barcelona.

Now that’s out the way, let’s check out the history between the two over the last century to give us more of an idea how it all started.

Let’s look back at the first ever match between Barcelona and Real Madrid. The encounter took place on May 13th, 1902, well over 100 years ago! Barca won the match 3-1, and it set off one of the biggest rivalries in world football.

One reason that locals say that the rivalry is as intense as it is, is down to where Barcelona and Madrid are situated. Madrid, as the capital, so it’s where the Royal Family reside. It’s the city that has been seen as a place that promotes conservatism whereas Barcelona is the opposite. Catalonia is a more liberal region, open to change and at the forefront of fashion. This has facilitated the football intensity between the sides even more. 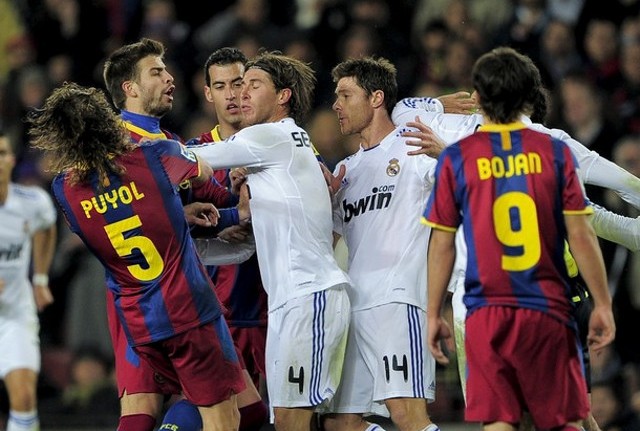 The influence of the Spanish Civil War.

You might not think this will have anything to do with football teams but the Spanish Civil War had a significant influence in shaping what the rivalry is like today.  The Civil War went on for 3 years between 1936 and 1939. At the time, Spain was ruled by dictator Francisco Franco.  He staged a coup which ended the war. He was stationed in Madrid.

Barcelona had protested against most of the policies once he came to power. This didn’t go down well with Franco. He would implement a reign of torture and murder to get people in line. Catalonians didn’t like this.  They knew he was an avid fan of Real Madrid. Because of the way Franco ran the country, people started to invest more of their time in supporting Barcelona as a way of protest against the regime. This intensified the rivalry between the sides.

The Transfer of Alfredo Di Stefano

The Di Stefano transfer will live long in the memory of both teams. He was eventually signed by Madrid after a long saga between themselves and Barcelona. He was going to sign for Barcelona but the Franco government meddled in the dealing and Real ended up with Di Stefano. He ended up helping win the side win numerous titles domestically and in Europe while Barcelona trailed far behind.

In today’s day, the Barcelona and Real Madrid rivalry has enabled both sides to earn a ridiculous amount of wealth and prestige as a result of the history of years past. The transfer of Figo in the year 2000 added to the heated intensity. Who would have thought Barcelona’s gem would move to their bitterest of rivals?

Keep up to date on the PM blog or get in contact if you’re wanting any help in purchasing some of the best Barcelona and Real Madrid memorabilia from around the world.